Sephardic Recipes With A Modern Twist
Skip to content

One of my favorite recipes is this Spectacular Summer Semolina Cake, a great way to incorporate the flavor of peaches (and to use up all the ripe peaches in my home). 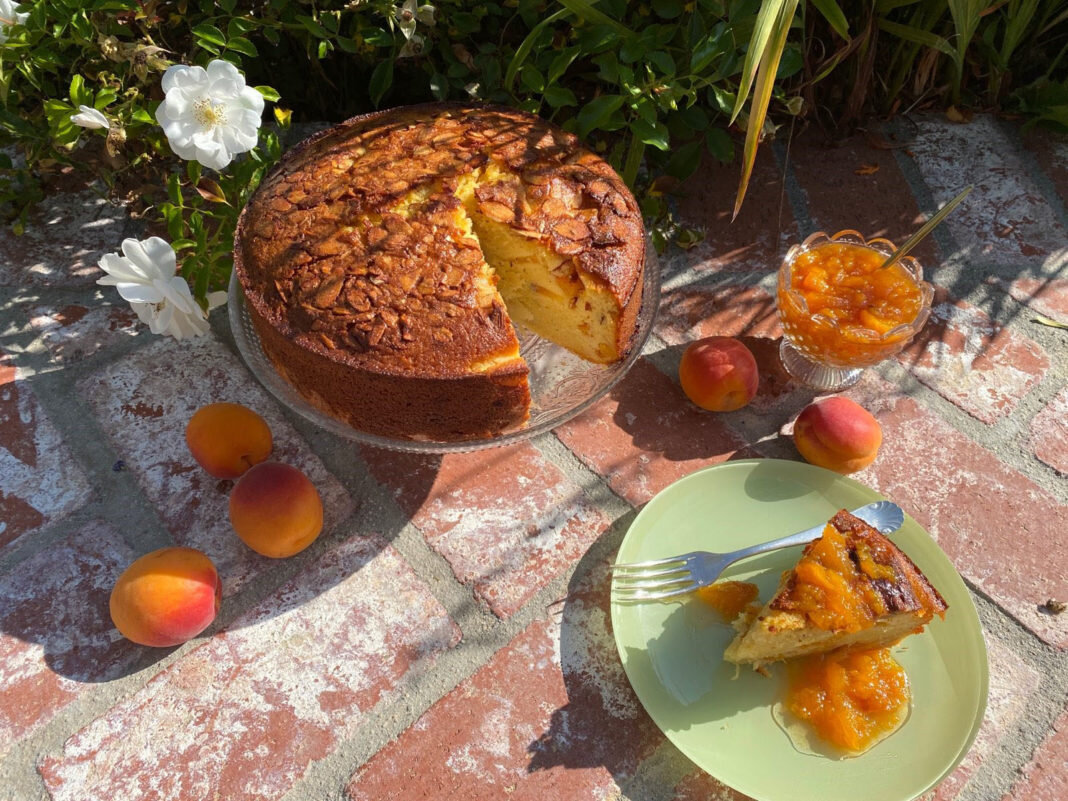 A favorite summer ritual, as a young married couple, was to pick up a peach pie from Marie Callender’s, a famous Los Angeles pie emporium during the 70’s and 80’s every few weeks during summers, piled high with fresh, sweet, juicy peaches and we’d take them to the home of Neil’s Uncle Jack and Aunt Sylvia. We would sit around the table in the hot summer nights, have some freshly brewed coffee — Yuban of course! — and dig into delicious fresh peach pie.

Neil‘s grandmother and Aunt Sylvia’s mother, “Ermana Miriam Levy”, were friends from Rhodes and now part of the LA Rodesli community. My mother-in-law Becky was a grade below Sylvia at the Manual Arts High School in South Central Los Angeles, an area that was home to the Sephardic Jewish community in the 30’s and 40’s. Their friendship was cemented during the war years, when Becky would drive Sylvia and their girlfriends home from dances at clubs like the Hollywood Palladium in the wee hours of the night. Sylvia married Uncle Jack, who came from Cuba and had charisma and a wonderful sense of humor.

When Neil was in high school, he would walk to Shabbat service at Magen David, the Syrian synagogue on Melrose Avenue and after he would stop at Jack and Sylvia’s home for a traditional Sephardic lunch of burekas, huevos haminados, cheese and olives. Having lost his father when he was six months old, Jack and Sylvia were second parents to Neil. We loved them so much that we called our son Max Jacob and our daughter Rebekah Sylvia in their honor.

Peaches, that delicious summer fruit, were first cultivated in northern China. From China, peaches were brought to Japan and India. Peaches were widely grown in Persia and legend had it that Alexander the Great brought them to Greece after he conquered the Persian Empire. Whether that is true cannot be proven but peaches were widely grown in Greece by 300 BCE. The Ancient Romans mistakenly believed that peaches were native to Persia and called peaches malum persicum “Persian apple.” This later became the French peche and peach in English. Ibn al-Awwam, in his 12th century Book On Agriculture describes peach tree cultivation in Spain. The Spaniards brought peaches to the Americas in the 16th century.

Although Thomas Jefferson had peach trees at Monticello, peaches weren’t grown commercially in the United States until the 19th century, when farmers began to grow them in Maryland, Delaware, South Carolina, Virginia and of course, most famously, Georgia.

When I took home economics at Beverly Hills High, the first cake they taught us how to make was Strawberry Shortcake with fresh strawberries and whipped cream. I was instantly addicted and constantly baking them. That’s when my love of cakes with fruit began.

Over the years, I have experimented a lot with baking cakes. Since both my parents were diagnosed with diabetes I have strived to make them healthy-ish. I cut the white sugar in half and substitute with honey, maple syrup or coconut sugar. In a gluten sensitive world, I have found many healthy alternatives to flour, like semolina, almond flour, coconut flour and oat flour. The results are delicious and my family and guests will barely notice the difference.

One of my favorite recipes is this Spectacular Summer Semolina Cake, a great way to incorporate the flavor of peaches (and to use up all the ripe peaches in my home). Almond extract and grated orange rind awakens the fruity aroma of the fresh peaches. Adding semolina adds a slight crunchy texture and the orange juice keeps it moist. Pouring the jammy peach syrup over the cake is just heavenly!

Join us at Sephardic Temple Tifereth Israel on Thursday, August 26th at 7pm for a Rosh Hashana cooking demonstration and tasting. Also at Beth Jacob, on Tuesday, August 31st at 7pm. Find details on our facebook and Instagram.

Line a springform pan or cake pan with parchment paper, then grease.

Wash, dry and slice peaches into half inch moons, leaving the peel on.

Place peaches in a bowl with ¼ cup of sugar, set aside.

Combine all the dry ingredients and orange rind in a small bowl and set aside.

In a stand mixer or with a hand-held mixer, in a large bowl, beat eggs and sugar until a creamy pale yellow, about 5 minutes.

Add the oil and beat for another minute, add orange juice and combine.

Slowly add dry ingredients to wet using a spatula, do not over mix.

Gently mix in ½ of the almonds into batter.

Strain any sugar syrup from the peaches and reserve.

Add the peach slices evenly into batter and sprinkle the remaining ½ cup of almonds on top.

Bake cake in the center of the oven for 50 to 60 minutes until the cake is golden and firm.

2 peaches, peeled and cubed
1 cup sugar, plus sugar syrup from peaches ½ cup water Juice of half a lemon
1 cinnamon stick

Pour the peach syrup, sugar, water, lemon juice In a small sauce pan and bring to a simmer, until all sugar has dissolved.

Add the cinnamon stick and peaches, slowly simmer until peaches are very soft and liquid has become a thickened syrup, about 30 minutes.